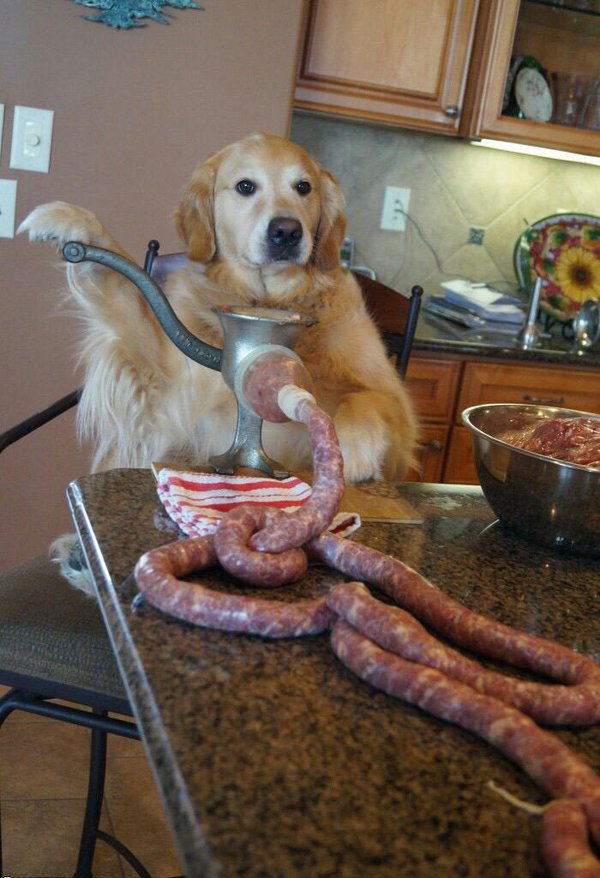 When a business, brand or product lacks a clear product path and voice, it often resorts to making sausage UX.

The stuff that falls to the floor and gets squished as new features or services pile down on top of it, the raw unfinished and not really quality tested grub, is shoveled up and put through the product meat grinder. Often, borrowed parts that worked for a competitor get repurposed under the guise of “enriching the flavor”.

This funky smelling sausage is given to us with a label that reads:

Except we aren't told that the slop was tested and approved by observing its acceptance against the feeding habits of maggots – creatures without much taste.

So, if an ingredient can fit into the meat grinder and the end product is greedily consumed by squirmy creatures, it matters not what it smells like to some management teams – until some bean counter eventually asks why only crawling larva like the sausage and no one else.

Grappling with the task of pushing a once satisfying and unique product that appealed to influencers to a new broader audience, Twitter is shoveling many past-expiration ingredients from its competitors (particularly the ones with a Facebooky smell) into its meat grinder.

It stopped making steak in exchange for hot dogs.

Twitter is testing its fundamentals because it simply lacks a strong product leader who cares about the taste.

As it tests removing the reverse chronological display of tweets to taste more like Facebook, Twitter will soon realize that many of its core users are ready to leave. We can get hot dogs anywhere.

More and more confused by the Twitter UX. Mixed older and new posts, promotions, ‘what I missed’ … Getting closer to point where I left FB. via karelocluk

In a sense, Twitter is already serving bad sausage to its users regardless of whether it nixes the idea of reverse chronological tweets or not. Its very willingness to test it out despite the very vocal outcry from users on its own product, demonstrates it does not get UX (user-experience).

This is the problem with businesses that fail at A/B testing. They believe it will make the product better without really comprehending the risks to UX and its brand image.

However, forcing new ingredients down our throats every few weeks while knowing full well that many of the loyal users are allergic to them is another story.

To an outsider looking in, Twitter looks indecisive. The management team looks inept when it does not know why its product is valuable.

Too often, A/B testing creates friction while upsetting the UX cart with a minimal return. It is over-used and over-relied upon by many product companies who often already have the data and user-feedback that is needed for many product decisions.

A strong product leader already has the good sense to understand why the product is a success. S(h)e is capable of unlocking value already built into a product and its users. Also, there are lines in the sand that can not be crossed and good product people know where those lines are – when UX is the compass.

Let's be real after all. People typically build products out of a passion to solve problems. We create things that we would want to use. That's what Twitter was.

It attracted a user base because of its uniqueness and ability to be different – a solution with its own taste.

Now, it's chasing its tail like just any dog spinning in circles. It doesn't know where it wants to go and believes that because it's moving, it's going someplace – until it stops to check and notices another dog running by with the steak it once had.

Twitter, as a solution, is just becoming more confusing as many are now voicing within tweets.

Twitter will make an excellent UX study for anyone wanting to learn about this field. I'm looking forward to reading the memoirs of a Twitter insider because I have so many questions about the environment and power struggles inside of Twitter. In particular, I'd love to learn more about the UX role and people involved within the UX team. I can't imagine that team, if it is a professional one with some UX chops, being happy over recent Twitter trends.

I don't know if Twitter will recover from its sausage fest, but I've found other places to chill. I imagine that others are too. “Leaving Twitter” is an interesting search phrase on Twitter these days.

Sausage UX might appeal to some, but look out when people realize that they can still enjoy something better tasting elsewhere. Read the Ello manifesto for example. So Twitter, keep tossing anything into the meat grinder and soon enough, you're the only one eating your own dog food.

Users only put up with so much and sausage UX has a very quick expiration date.

Twitter, I hope that your UX taste improves before I have to say, “No more of my data for your sausage machine!” – Have your weekly reports shown me using you much less these days?