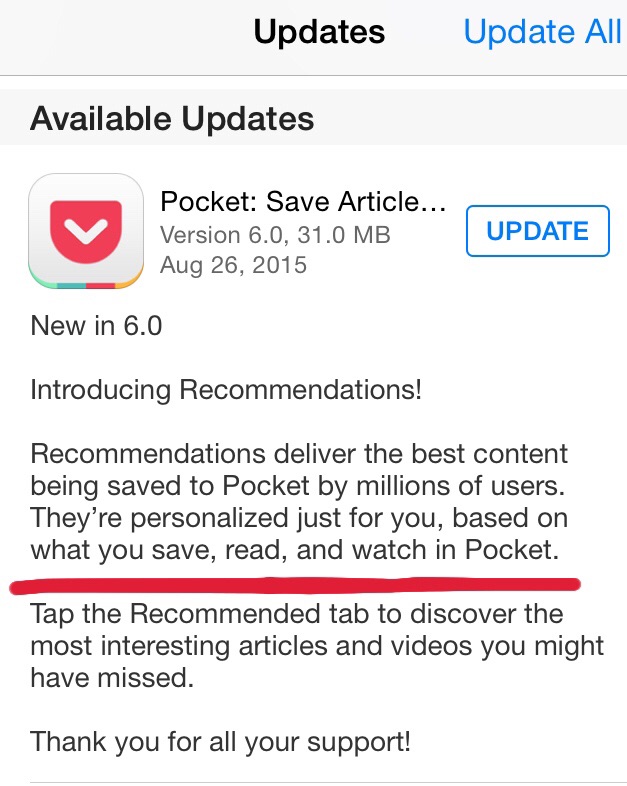 Recommendations are based on our bookmarks with Pocket.

Perhaps I'm being oversensitive to this, but after being abused by so many privacy policy updates and practices that are designed to get users to fork over data for their ad model supported businesses, it doesn't take much to ruffle my privacy sensitivities.

Pocket is that bookmarking read-later app that I found useful for saving online articles for later consumption or research. Many others liked it too.

Mozilla thought that it was good enough to add it to its Firefox browser even. When others complained to Mozilla about it, I wasn't too bothered by it since I was already using it. I understood why they complained though about allowing a 3rd party to be included within the default Firefox experience. Privacy and open source solutions run strong within the Mozillian mind.

When I saw Pocket's latest update that includes Recommendations, my privacy flag went up though.

I realize many apps offer a recommendation feature, but one that is based on a bookmarking service is a bit different. Historically, bookmarks were considered hands-off for privacy reasons, but cloud solutions inched their eroding feet into that concept.

Today, Pocket wants to serve recommended articles based on our bookmarks without an opt-out option. Perhaps this works on an anonymized fashion, but we've seen too often how that really doesn't mean much when confronted with the efforts from serious hackers.

This “feature” will make it nice for advertisers and those shady data brokers I've mentioned before who already own much of our data.

So, I thought it would be a good time to check out Pocket's privacy policy and was reminded that this is a company that does:

We may also use “pixel tags,” “web beacons,” “clear GIFs” or similar means (individually or collectively “Pixel Tags”) in connection with emails that we send to our users in order to collect usage data.
– Pocket Privacy Policy

On the surface, recommendations may sound like an innocent feature. However, under the hood, they open up a privacy can of worms and advertising gold mine (depending on what side of the ad you sit on). A bookmarking service needs to be held to a higher security standard than other apps in my personal opinion.

I hope that Pocket rethinks recommendations before I delete the app.

[Update] I received the following tweet from the Pocket team.

Your data (saves, recommendations) is not and will not be shared with third-parties. This policy will always be important to us. – @pocketsupport

They also confirmed that this data will not be used for ad targeting.

Pocket also mentioned that content in the Recommendations tab is not actually loaded unless a user taps on the tab.

Hopefully, businesses will provide a clear privacy statement when releasing a big feature to quench our privacy sensitivities. Privacy gets thrown under the bus too often for it not to be considered during the release communication process.

Thank you Pocket for the clarifications.