When it comes to PR and social media, we generally appreciate when a company delivers a genuine apology for official statements or actions that have angered its customers or users.

An apology can go a long way in healing hurt feelings.

Understanding the feelings of your customers and users from the get-go can prevent the need for an apology though.

That’s why anyone involved in PR or social media engagement needs to be carefully tuned into the user experience of their organization.

The official apology from Mitchell Baker on behalf of Mozilla over the recent ruckus concerning its CEO position is an interesting example of an apology and endorsement of actions that probably should have been more carefully thought out.

Mozilla chose its CTO to fill the role of CEO. Brendan Eich filled that role for less than two weeks.

A group of folks though mounted a campaign against Mozilla and its browser Firefox because of some private dollars Eich spent here or there in the past.

Brendan Eich has chosen to step down from his role as CEO. He’s made this decision for Mozilla and our community.
Mitchell Baker, Executive Chairwoman

The apology also includes this statement:

Mozilla believes both in equality and freedom of speech. Equality is necessary for meaningful speech.

The thing is, Mozilla didn’t realize that this apology addresses only the group of folks who wanted Brendan out because of his personal views (which didn’t impact his professionalism as CTO).

The message Mozilla sent is that “equality” is selective – as well as “diversity and inclusiveness”.

We know why people are hurt and angry, and they are right;

One might argue that Mitchell’s statement above condones a hostile work environment even.

We didn’t move fast enough to engage with people once the controversy started.

That statement is good advice though. Engagement is important. However, the right tone is even better.

In this case, the apology throws Brendan under the bus for having a personal view that conflicted with others – a situation in any company but one that doesn’t always require an apology in this fashion.

The precedent that Mozilla is setting though is now mobilizing another group of folks who are requesting us to boycott all things Mozilla and who are also presenting that message on websites visited from Firefox – just like what the first group of folks did.

So Mozilla has lost a CEO, has a reduced board, aliented users in two camps, and contributed now to a harmed user experience for us who still use Firefox.

An apology was issued that might bring back some who left Firefox for other browsers because the first group of folks told them to. I guarantee that not all who left and found other browsers will return though.

The second group of folks is just getting started with their campaign and Firefox will now lose more users.

Update: The effects of upsetting a userbase with an apology that contains the wrong message is now being seen on Mozilla’s Firefox feedback site. Firefox now has a 92% negative sentiment rating during the recent 7 day period. See the red line below? That represents the quantity of sad comments left on the site. 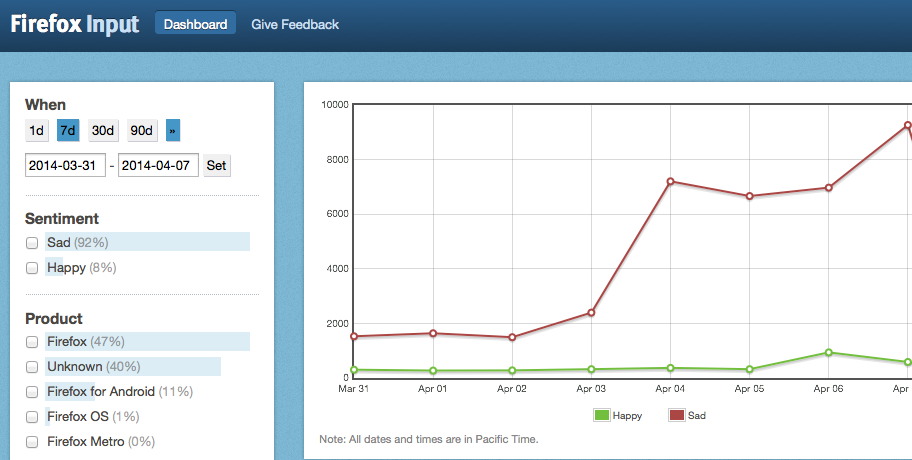 So even with an apology, Mozilla’s troubles are not over.

An apology is not such any easy thing to deliver – and sometimes can add to a brand’s media storm.

Mozilla will need to engage more … with the right tone.