Generation Z (also iGen, Post-Millennials, Centennials, or Plurals) are the cohort of people born after the Millennials. The generation is generally defined with birth years ranging from the mid or late 1990s through the early 2010s or starting from the early 2000s. ~ Wikipedia

Generation Z is starting to come into its own and distinguishing itself from other generations. Very often we hear talk about millennials using social sites, but Gen Z should be your focus if you’re trying to capture viewers and users in emerging markets. A report from college marketing and insights agency Fluent examines the online activity of Gen Z, along with some insights on their use of social networks.
~ AdWeek

It's time to probably become familiar with Gen Z and the places they hang if your business is eyeing growth.

Facebook is still the top network for many users; however, it functions as a cornerstone of social media use and not the only destination. Fluent found that 51 percent use the platform for keeping in touch with high school friends, and family, while 39 percent use it to connect with college friends.
~ AdWeek 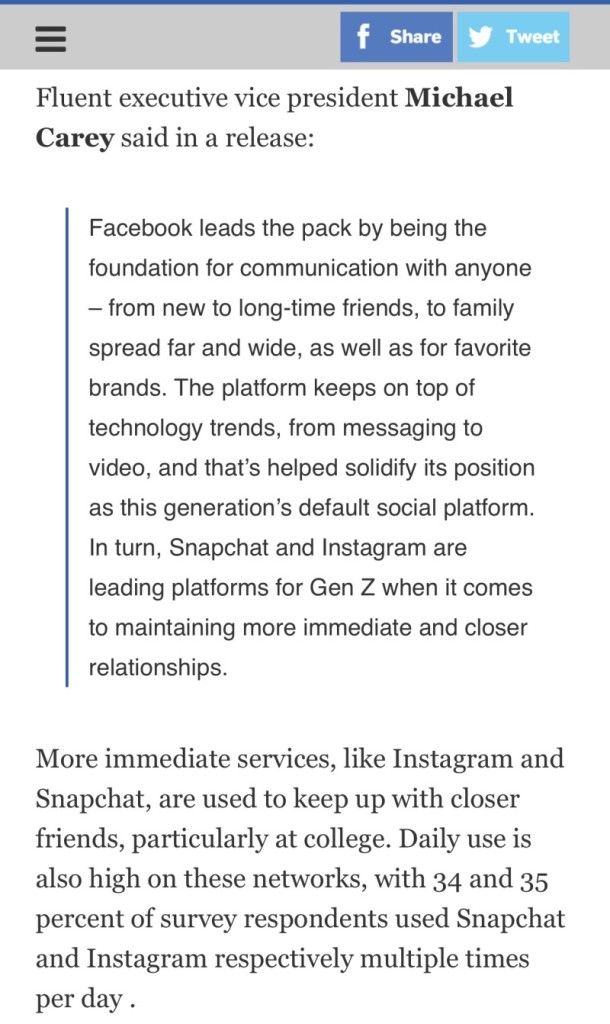 YouTube is still a core destination for video for 80 percent of survey respondents. However Facebook has made huge gains, with 79 percent of respondents using it as a video destination. Additionally, 32 percent watched video for at least an hour a day, while 30 percent view for two hours, and 21 percent view for three hours. Clearly video has a great deal of influence. ~ AdWeek

Personally, I'm a Wickr Me kinda guy for privacy & security. Yet, the masses of Gen Z choose Snapchat – often, the masses care little about company ethics or security.

Facebook may still be the biggest social game in town, but Gen Z seems to approach it with reluctance. Instagram is probably more liked, but the effects of Facebook's ownership and increasing ad roll outs, may affect that view.

I suppose the only real ad-free play in social that is a mix of Tumblr and Twitter is Ello. For the moment, I think Gen Z ignores Ello which tends to attract a more creative artsy vibed crowd. However, Ello is an oasis to watch.

Keep in mind that being genuine is better than spammy. Each social platform has its own personality (and set of bugs) too. Rather than fumbling your way around, let an experienced social sherpa help your business.