This is a critical usage bug.

I really love the customization of Airmail and it is superior to other email apps for iOS for this alone. There are enough other reviews out there to learn more about those things.

This is really just my one gripe review, but one which is critical enough to affect usage and result in miscommunication – something no email client these days should do.

This is a critical bug that I've observed on the Mac desktop Airmail client too. In fact, I receive way too many emails in Airmail that appear blank or oddly missing photo attachments that the sender obviously included, based upon the text content of the email.

A reply from the Airmail team reflects the crux of the issue:

However, UX and user expectations need to be carefully considered. If emails are delivered to Airmail clients missing intended attachments, that will cause obvious issues and makes Airmail unreliable.

Here is an example of how Airmail contributes to usage problems and makes it unreliable.

From inside Airmail for iOS, I composed an email to the Coda team. I opened up the Airmail composer, wrote some plain text, then tapped on the photo library attachment icon. I selected two images this way to attach to the email. Any standard email client would send the email out and represent it as one that included an attachment. Of course, it's up to the recipient's email client to decide on how to display that email, but on Airmail's side there should be no confusion. I intended to send a MIME Content-Type: text/plain email with two attachments – to get technical on how Airmail or any standards compliant MUA should handle this. 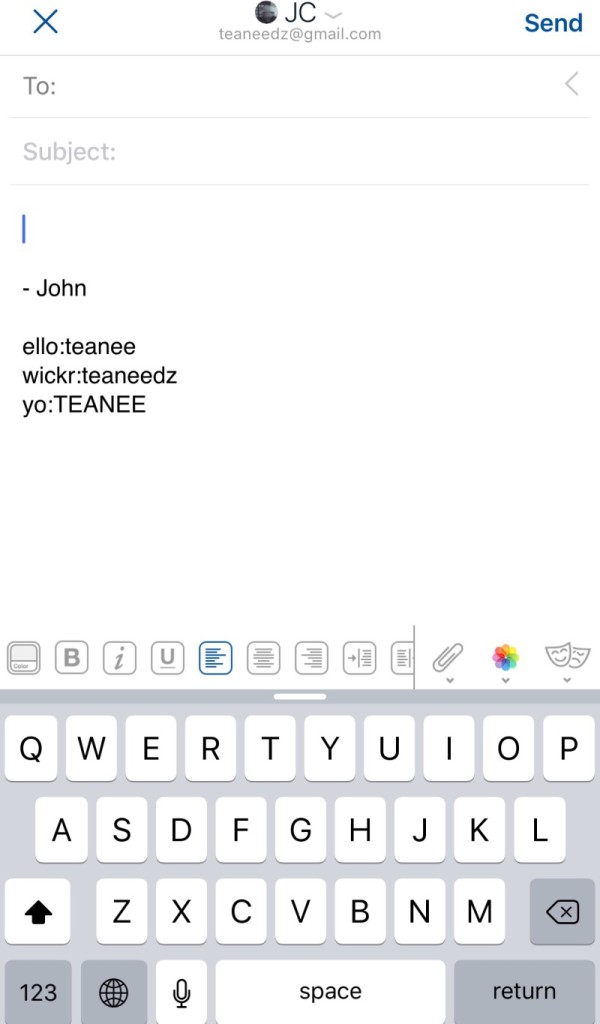 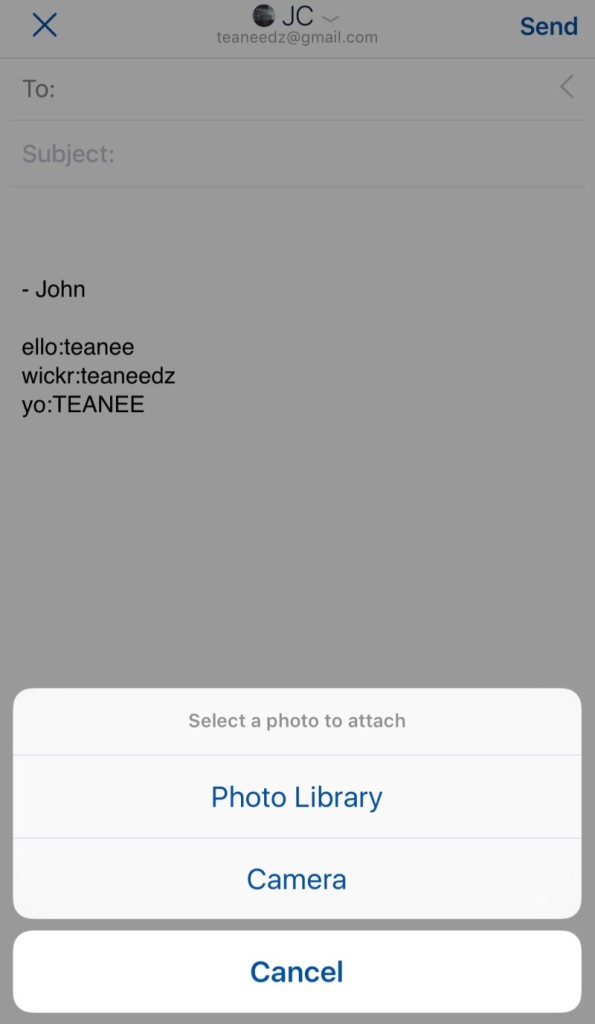 This is what happens though. From the Airmail sent folder, you can see that the email header summary does not include any visual indication, like a paperclip, that the email includes attachments. When opened, only the plain text part of the email is visible with no indication that attachments were included. 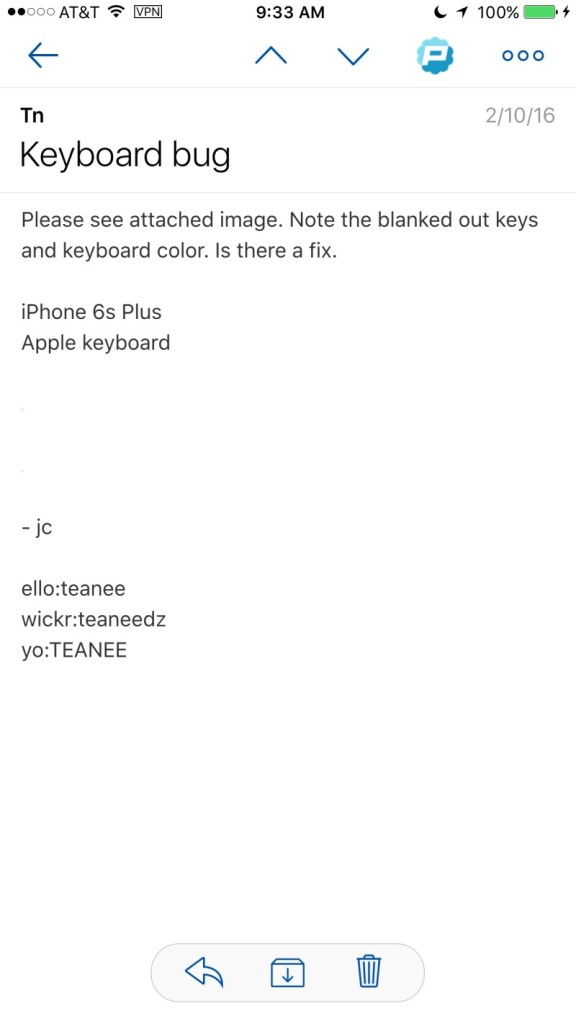 Now, from inside the Apple Mail app sent folder, you can see that the exact same email has an attachment because there is a paperclip that indicates it. When I open the email in Mail, the plain text is visible along with the two photos (open, visible and inline). 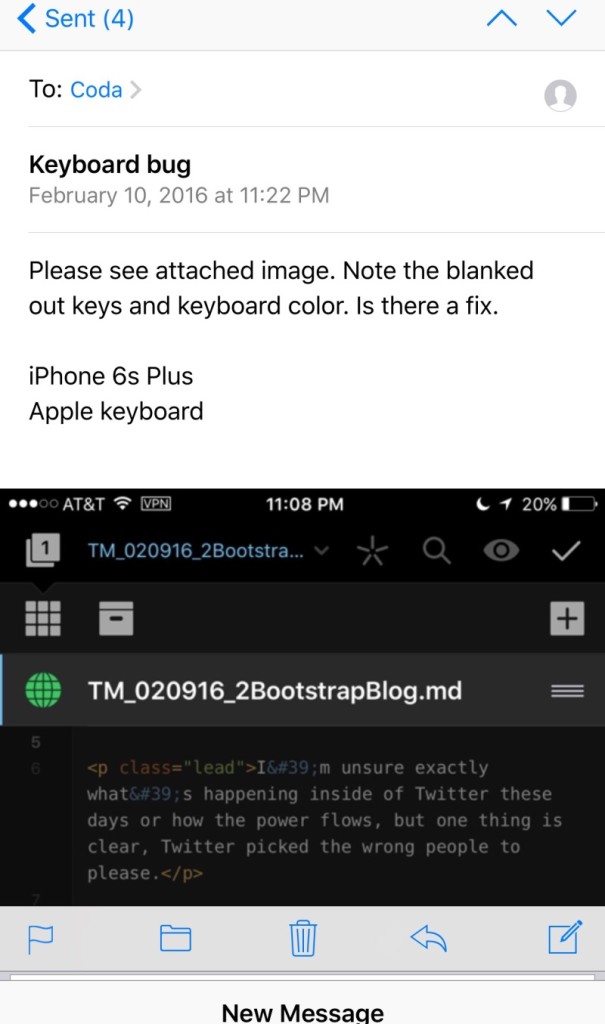 Since Airmail is not handling the sending of emailed attachments correctly, it also explains why it is not rendering received emails that contain image attachments correctly too. I'd wager that many users of Airmail do not realize that this is even happening. Only when the sender outright indicates within the text that they've included an image, would the Airmail user realize that there was a problem – and perhaps chalk it up to a sender's email client issue.

If Airmail treats my email as a multi-part/alternative MIME message, fine I guess (even though I didn't include any HTML elements), but handle the image correctly. An attachment is an attachment and an image is ultimately an attachment (if not remote). Use
Content-Disposition: inline
for display purposes, but let users know that there is an attachment.

I once more ask the Airmail team to please fix this bug.

Maybe, bring us Markdown support too in iOS (like on your desktop version.